About 900 million hectares of arable land are not properly utilised for agriculture in Africa’s rich soil, Indian Minister of Industry, Commerce and Textile, Mr Anand Sharma has said. 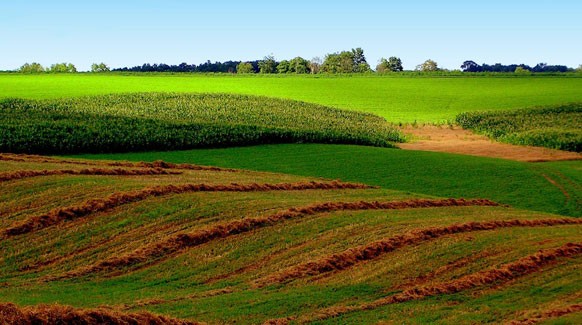 In geography and agriculture, arable land (from Latin arō: “I plough, I farm”) is land that can be used for growing crops.  It includes all land under temporary crops (double-cropped areas are counted only once), temporary meadows for mowing or market, and kitchen gardens and land temporarily fallow (less than five years).  In 2008, the world’s total arable land amounted to 13,805,153 km², whereas 48,836,976 km² was classified as “agricultural land” (Wikipedia).

Although constrained by landmass and topology, the amount of arable land, both regionally and globally, fluctuates due to human and climatic factors such as irrigation, deforestation, desertification, terracing, landfill, and urban sprawl.

Land which is unsuitable for arable farming usually has at least one of the following deficiencies: no source of fresh water; too hot (desert); too cold (Arctic); too rocky; too mountainous; too salty; too rainy; too polluted; or too nutrient poor.  Clouds may block the sunlight plants need for photosynthesis, reducing productivity.

Each year, arable land is lost to desertification and erosion from human industrial activities.  Improper irrigation of farm land can wick the sodium, calcium, and magnesium from the soil and water to the surface. This process steadily concentrates salt in the root zone, decreasing productivity.

About 900 million hectares of arable land are not properly utilised for agriculture in Africa’s rich soil, Indian Minister of Industry, Commerce and Textile, Mr Anand Sharma has said.

Speaking at the opening of the 8th India Africa project partnership, Sharma said beside the unused land, majority of the people in the continent are young and energetic and capable of using the land to better the economy.

“At the moment, more than half of the world economic output is from developing countries with Asia alone contributing almost 50 per cent” Sharma stated.

The recent partnership initiative is seriously working, adding that a lot of private and public institutions from India are in various African countries, helping them to build infrastructure and develop institutional capacities.

Other areas in focus include: regional integration, market access, mining, minerals, education, and entrepreneurship development. India considers agriculture very important because without food security any other plan is not workable.

“With a population of 1.2 billion, we realized there is no country in the world that has enough to feed us, that is why we have to do it ourselves.  So also Africa with growing population getting to 900 million people, but with greater advantage of mass land more than that of India can do better to become the food basket of the world,” Sharma said.

Vice President of Zimbabwe, Mrs Joice Mujuru, said the partnership between the two continents is the one that needs to be pursued vigorously.

She said the leaders in Africa are determined to see that the relationship grows in a win-win scenario.

President of the confederation of Indian Industries, Mr B. Muthuraman said in his opening remark that Africa will be the next manufacturing hub of the world by 2030.

Eru Kobe Godwin is a poet, designer, and a writer at connectnigeria.com.   He is also the CEO at Cypress Concepts: corporate and casual shirt designers and stylists.

Continue Reading
Advertisement
You may also like...
Related Topics:Agriculture

Top Cryptocurrencies You Can Invest In