Nnemkadi Chinwe Victoria “Nneka” Ogwumike is undoubtedly one of the greatest Nigerian basketball players in history. The eldest of the Ogwumike sisters (basketball trio), Nneka was born in Tomball, Texas, USA, on July 2nd, 1990.

Her talent would show at an early age as she had to choose Stanford University over Duke, Connecticut, Baylor, Notre Dame, and Tennessee, for her collegiate basketball career.

Nneka’s professional career kicked off on a bright note after she made the 2012 WNBA Draft as the first overall pick by the Los Angeles Sparks on April 16th, 2012. She would hit the ground running, after signing an endorsement deal with Nike, by setting a career-high rebound of 20 alongside 22 points against the Indiana Fever on July 12th, 2012. 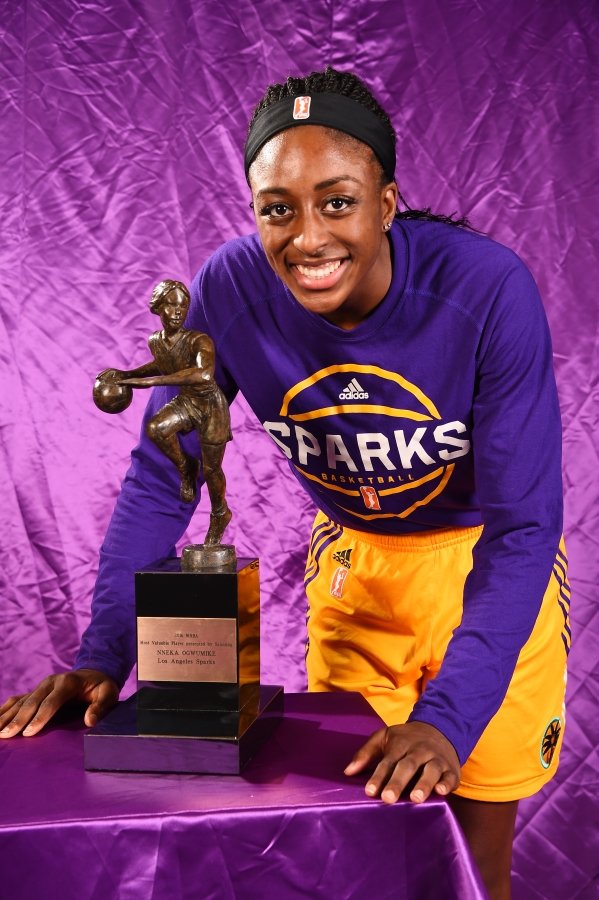 Following the expiration of her rookie contract, the Nigerian-American star re-signed for the Sparks in 2016, a season she would be named the AP WNBA Player of the Year, and the WNBA Most Valuable Player. Nneka also won her first WNBA championship in 2016.

In her off-seasons, the Nigerian-American has featured for CCC Polkowice in Poland (2012-13) and has had all her off-seasons since 2014 with Dynamo Kursk of Russia.

The 31-year-old in January 2021 re-signed with the Sparks in a multi-year contract.

At the national team level, Nneka was instrumental in the gold-winning USA Women’s U-18 team in the 2008 FIBA Americas Championship in Buenos Aires, Argentina. She would continue her exploits with the US team during the 2009 U19 World Championship in Bangkok, Thailand. Aside from winning gold with the US team, she was named in the all-tournament team.

At the 2011 World University Games, Nneka represented the US team alongside her sister, Chiney Ogwumike, as they won gold. In 2014, Nneka and the US team won the FIBA World Championship for Women.

Nneka switched allegiance to Nigeria ahead of the Tokyo 2020 Olympics but was declared ineligible by FIBA owing to the fact that she already had a prior engagement with Team USA. Despite appeals made by the Nigeria Basketball Federation (NBBF), Nneka had to miss out on the tournament for the African champions.

How To Secure A Business Grant In Nigeria

Up To $100,000 Investment Available In The UNICEF Innovation Fund Program 2021

The Discovery Of The Dufuna Canoe, Africa’s Oldest Boat

The Discovery Of The Dufuna Canoe, Africa’s Oldest Boat

Nigerians In Diaspora To Receive Passports Through Mail